The fortification situated on the Kegelriß 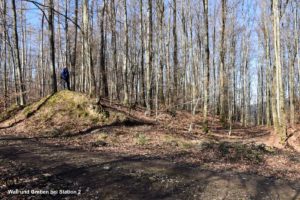 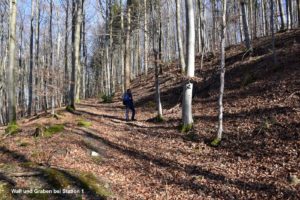 Archaeological research has proved that the rampart having a height between 2 and 6 meters, is dated back to the time between 150 and 80 before Christ. The fortification surrounds a surface of about 16 hectares and only the wall (map No. 1) with parts of a trench lying off (map No. 2) is still visible today. On three places the circular wall is cut and crossed by modern forestry roads. Despite the good situation of the circular wall no gate system can be recognised anywhere. In southwest direction the fortification goes the steep slope down to enclose a source having water even today (map No. 4).
During excavation works the construction of a wall, made of wood and soil, was found in 1989. Originally this construction was more than 6 meters tall. The front line of this wall shows, at intervals of 3.4 m, upright vertical posts being connected with wooden bars and cross tie bolts. Due to the decay of the wooden posts the wood-soil-construction is sunken and only visible in the shape of a wall.

The legend of the skittles

Once upon a time a fort as well as a mine site, being close to the fort, were located on the castle hill in the Ambringer Grund (Kegelriß). The mine delivered an enormous amount of gold and silver, therefore, the lords collected great treasures in subterranean vaults. One part of this treasure were skittles consisting of nine silver pins and three golden balls. During holidays, the mineworkers played with them. The golden key granting access to the vaults, was kept safe in the castle church of Saint Martin. When the castle fell into the hands of the enemy, Heini, a hermit living close to the castle, saved the key. Brother Heini who was buried together with the key close to the Eselsbrunnen (Radstube am Bergbaupfad – wheel chamber situated on the mining path) must protect as a ghost, the treasure together with a black giant and a bear in the subterranean vaults (old mine tunnel).

Information: In Germany 28 legends are famous telling the story of golden and silver skittles (among others the legend of Belchen as well as of Zähringen castle). Most of these legends are linked to castles and the mining industry. Since the Middle Ages, the skittles have been known in Europe and were played by miners. However, we do not know how old the legends of the golden skittles are. Usually they were documented in the 19th century.